Prof. Solt's interests include comparative political behavior, comparative public opinion, and political economy from a cross-national perspective; he is also interested in computational methods for cross-national research. Much of his research has focused on understanding how and why the extent of economic inequality in a country shapes the attitudes and behavior of the people who live there. To provide data for such work and many other topics in the study of income inequality, he created and maintains the Standardized World Income Inequality Database (SWIID),which provides the most-comparable data available on income inequality for broadly cross-national research. He also leads the Dynamic Comparative Public Opinion (DCPO) Lab. His work has appeared in the American Political Science Review, the American Journal of Political Science, the Journal of Politics, the British Journal of Political Science, and other leading disciplinary and interdisciplinary journals. 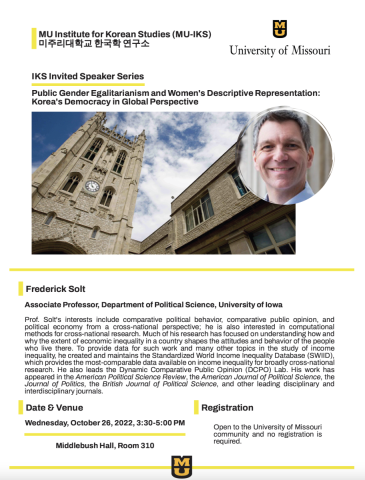